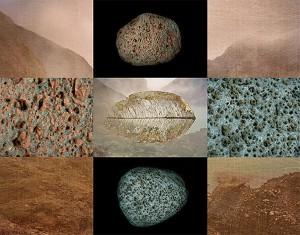 One example: The stunning assemblage called “Ring of Fire,” in which Rubenstein details images of volcanic ash and rock — along with the remains of a single leaf — against the backdrop of brownish-reddish terrain that resembles the surface of Mars. Geologists call the swath of the Pacific Ocean from New Zealand to Chile, where most of the world’s volcanoes and earthquakes occur, “the Pacific Ring of Fire.” Indonesia’s volcanoes are particularly active, regularly blanketing the skies with ash and (at their deadliest) spewing enough lava to kill thousands of people. Rubenstein’s “Eden Turned On Its Side” series narrates nature’s cycle of birth, death, destruction, and rebirth, and the way humans are pulled into that cycle and depend on nature continuing to “work.”

“Eden represents our origins and genesis, but if you look at time in a different way — at deep time — and the genesis of the planet, we go back much further in time, and that’s why volcanoes interested me,” Rubenstein said. “It’s about the beginning of Earth.”

Experiencing the volcanoes up close gave Rubenstein a vivid sense of how active they really are. Even when they’re not erupting, the ground beneath rumbles constantly.

“The volcanoes are hot all the time, and the sand [on the ground] is burning and becoming molten, and when it’s molten it becomes glass,” she says. “So when it’s erupting and sparking, it’s [spewing] glass shards.”

Destruction also defines Iraq’s southern marshes, drained by Saddam Hussein in the 1990s to uproot the hundreds of thousands of people living there. The waterways, which connect with the Tigris and Euphrates rivers, are still recovering, and for the past four years, Rubenstein has been working to establish a wastewater garden that is also a cultural heritage site. Partnering with an Iraq-based nongovernmental organization and the Iraqi government, she is trying to secure sufficient funding for the project while finalizing permissions from tribes whose claims to the land date back generations, almost to biblical times.

“As I’ve gotten older, I don’t want to run into these places to take pictures, and the garden gave me a way to be there,” Rubenstein says. “We’re close to making this happen.”

Rubenstein has had a celebrated career that includes some of the art world’s highest achievements, including a Guggenheim Fellowship and a fellowship from the National Endowment for the Arts. She’s exhibited widely, including a show at the Louvre. A longtime arts educator, she ran San Francisco State’s photography program from 1985 to 1990. (“It was my best job,” she said.) Among Rubenstein’s other distinctions: Studying at MIT in the 1970s with the celebrated photographer Minor White, who advised her to get a graduate degree so she could teach for a living. Rubenstein did, at the University of New Mexico, Albuquerque — where the department head was Van Deren Coke, SFMOMA’s first photography curator. She now teaches at Nanyang Technical University in Singapore, from where she can travel easily to Indonesia and Iraq. She began her career training with White for free.

“I was one of three women who ever worked with Minor,” says Rubenstein, who when she’s not traveling or teaching is based in Santa Fe, N.M. “This was 1972 to 1973. He didn’t tell any of the guys [working with him] to go to graduate school. I did my dissertation on Georgia O’Keeffe and Alfred Stieglitz and their mutual influence, so I could figure out how a woman could survive being an artist.”

Rubenstein’s “Eden Turned On Its Side” series doesn’t proselytize, and it’s certainly not trying to convert people to believe in God or the Garden of Eden. But in seeing her images in the quiet space of Brian Gross Fine Art, it’s easier to understand why naturalists like Henry David Thoreau rejected traditional religion. (Thoreau looked for “God in Nature, to know his lurking-places, to attend all the oratorios, the operas, of nature.”)

The association between nature and devotion predates the Bible, but it found its metaphoric ideal in the Garden of Eden. That garden is still a work in progress, Rubenstein’s art says; climate change and other factors will determine its survival. Rubenstein’s images bear witness to a complicated process of expulsion and renewal.

She doesn’t show Indonesia’s volcanic eruptions. But in Pyroclastic Remains (After Mt. Merapi Grand Eruption, 2010-11), she shows the aftermath of a volcanic spasm, when trees are obliterated and the ground is full of fallen fruit. The same image has scenes of regeneration.

The volcanoes, Rubenstein says, reflect “horror and beauty together.” In being there, she says, “I was scared and thrilled at the same time.”