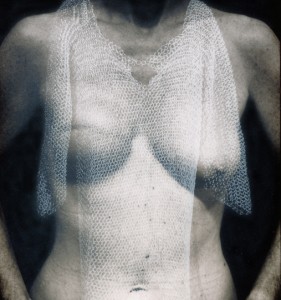 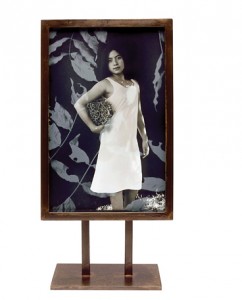 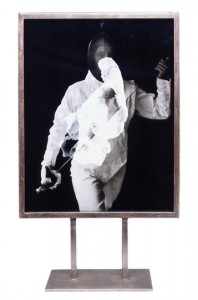 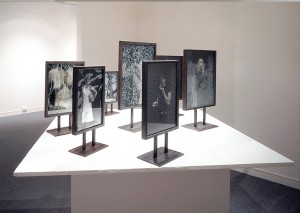 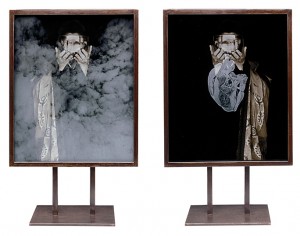 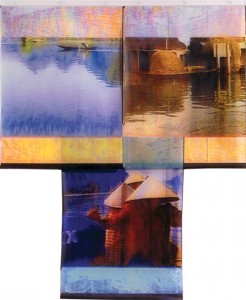 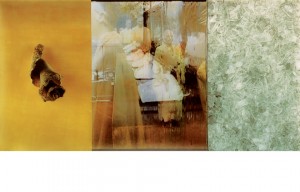 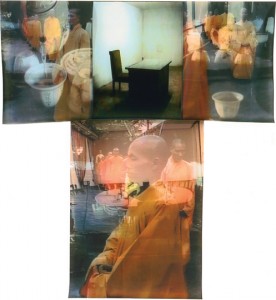 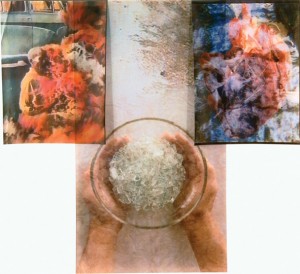 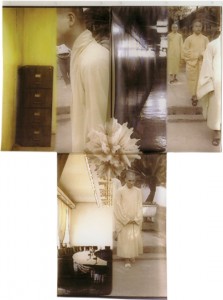 All my life I’ve wanted to be invisible.

Yet over and over I’ve been given a body. Each time

None of it mine. Not the gender, not even the name.

The terrible truth of Joan.

The cutting of hair. Armor pressing down

on breasts.  Weight of a sword on a slender wrist.

Visions in the radiant air. To burn at the end

dark chamber for imprinting the world.

I’d been in love with Joan of Arc since performing in highschool  her monologue from Jean Anouilh’s  The Lark .  After introducing the idea of armor with Oppenheimer’s Chair, I continued to explore our bodies in pain this time with armor as a she.

Joan’s Arc #1  consists of 6 sandblasted glass clouds overlayed on steel that gradually and sequentially break through the wire breast plate.

Joan’s Arc #2   is a glass triptych where the central  image changes from a slingshot to a snake skin to a birds nest holding a world globe.

Joan’s Arc  #3 is a phalanx of standing female figures -some whose bodies are their battlefields,  some whose youth may be their shields, or those whose spirit is their weapon. They are small, each a different size, on transparent duraclear film sandwiched between glass with a photo sandblasted onto each side. A poetic text is created from the signs and symbols as you walk around them. The only way to view the sandblast image is to keep moving and changing your position to see clearly.

In 1997 I took Joan to Vietnam to explore even further the body under siege. What better model than to be in a place where people had been defending their homes for over 1000 years. I went as a tourist with only a video camera and when I returned home I found I could use that video to make conceptual links to generate images.  In the studio I  made faceless robes  from montaged video stills, printed them on vellum and rearranged my imaging process to be output digitally.
The Vellum robes were backlit by light shining through sanded plexi glass frames.

Vietnam is overwhelming for the American tourist who comes guilt ridden about the war only to find a people with open arms ready to give. I made some glass casts of Vietnam bamboo hats to serve as begging bowls. I projected video into the bowl to make a piece called Eleemosynary- one who gives or receives alms.  This piece asks the question who gives the bigger gift, the beggar or the one who offers.

I became interested in the two very different body forms –  Joan sentries and the headless vellum Robes mirroring each other. I exhibited  them in the same space-east and west.